In 21st century Britain we largely view umbrellas as wholly practical items that protect us from the rain. They are also very disposable things in the modern age, with an depressing 1.1 billion umbrellas thrown away worldwide each year.

It wasn’t always this way though. The umbrella has a very noble past, starting out as a parasol to protect people from the sun in Ancient Egypt. The earliest known are seen in Egyptian art dating back to the Fifth Dynasty, around 2450 BC. The Egyptians used umbrellas both for practical and ornamental purposes, with many temple wall paintings and reliefs showing a servant holding a parasol over a god during a procession.

Due to the expense and expertise needed to manufacture them in ancient times, umbrellas and parasols became objects of power and status, and were used to protect important people such as gods, royalty and religious leaders (a world away from their current ubiquity). This led to many religions adopting parasols and umbrellas as part of their ceremonies.

In this article we’ll take a closer look at how the different religions have used umbrellas in the past and right up to the present day.

The people of Ancient Greece believed in multiple deities (polytheism), and umbrellas featured in ceremonies devoted to several different gods and goddesses.

During the festival of the Skirophoria, which marked the end of the old year in May or June, a white parasol was carried from the Acropolis to the Temple of Phalerus by the priestesses of goddess Athena. White parasols were also associated with gods Demeter and Persephone, who represented the harvest, and they were also used when praying to the gods of fertility.

Brightly coloured umbrellas were carried by followers of Dionysus, god of wine and pleasure, in festivals and processions. This may have led to their popularity with women as tools for mating rituals – to either flirt with or ward off men – and then as a fashion accessory. Umbrellas that could open and close were mentioned in the writings of comic playwright Aristophanes who lived during the 5th century BC.

The Oriental Orthodox Churches are a group of Christian churches that have between 60 and 70 million members worldwide. They are some of the oldest churches in the world and have played a part in shaping the history and culture of countries including Armenia, Egypt, Eritrea, Ethiopia, Sudan and the Middle East. In some of these churches, umbrellas are carried as part of their public worship to show honour to an important person, such as a bishop, or a holy object. 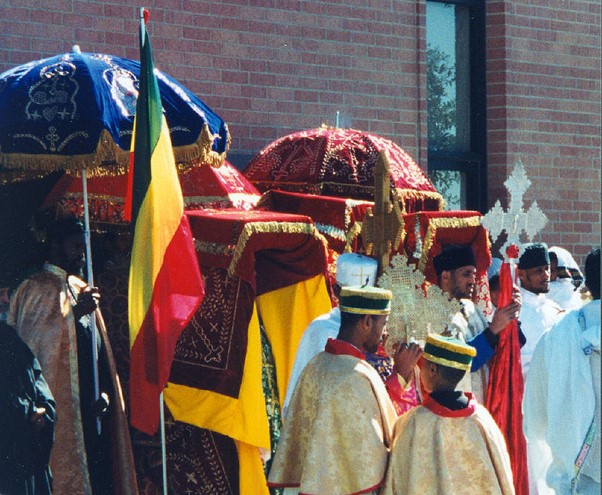 During the Ethiopian Orthodox Tewahedo Church’s ceremonies of Timkat, a priest carries a model of the Tablets of Stone (inscribed with the Ten Commandments) called a Tabot on his head. Brightly coloured and richly fringed liturgical parasols are carried above the Tabot as the priest processes to a body of water for it to be blessed.

Umbrellas and parasols play an important part in the symbolism of Buddhist beliefs. The umbrella represents the dome of the sky, which casts a protective shadow onto the earth. When an umbrella is carried above an important person or a symbol of a deity, it shows that the person or symbol is the centre of the universe, and indicates that they deserve respect. The pole of the umbrella symbolises the ‘axis mundi’, or celestial pole, which represents the connection between heaven and earth. The umbrella is so important to Buddhism that it can be considered as a mobile temple. 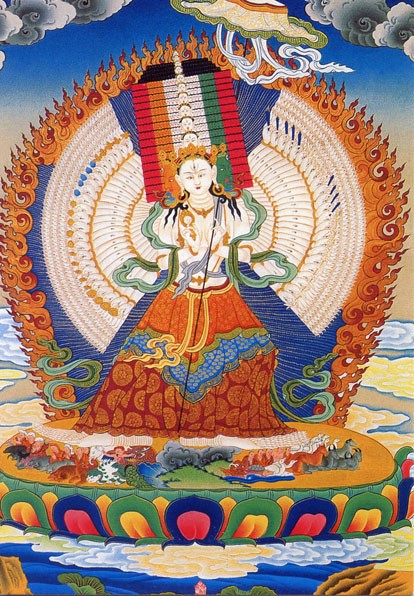 One of the Buddhist deities is called Ushnisha Sitatapatra in Sanskrit, which translates as ‘The Victorious White Parasol’. The parasol she carries demonstrates her ability to protect sentient beings from diseases, natural catastrophes and other calamities. The parasol is white because the means by which she protects people is through peace and pacification. In Tibetan Buddhism, some religious dignitaries are entitled to carry silk parasols, whilst secular dignitaries can carry parasols embroidered with peacock feathers. Buddhist leader the Dalai Lama is entitled to carry both.

In Hinduism, the parasol is known by the Sanskrit word of ‘chatra’, and is a traditional Indian symbol of both protection and royalty. The parasol is part of a grouping of eight auspicious symbols that were traditionally used in ceremonies such as the coronation or investiture of a king.

A jewelled parasol is still used in Hindu ceremonies today and performs the ritual function of a canopy. This offers protection both practically from the heat of the sun, but also symbolically from the ‘heat’ of negative forces such as greed, lust and suffering, all of which are viewed as obstacles on the path to enlightenment. 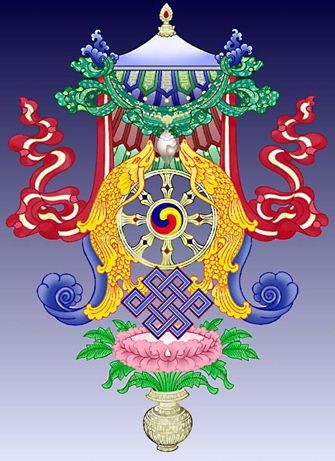 The parasol as part of the ‘eight auspicious symbols. (Image source: Pinterest)

In Ancient Rome public buildings used for the administration of justice and public assemblies were called basilicas. When Rome became Christianised around 300 AD, many of these basilicas were converted into churches, and the raised platform occupied by the judge became the altar. The term ‘basilica’ was also converted to mean a church with a special distinction, and one that could only be designated by the pope. 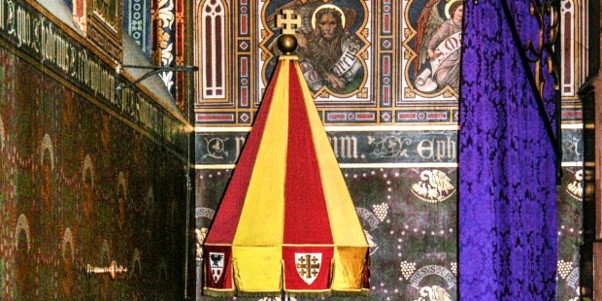 The umbraculum is a symbol of the Roman Catholic Church and the authority of the Pope (Image source: Aleteia)

The umbraculum, which translates as ‘big umbrella’ and is also known as conopaeum, is a historic part of the pope’s regalia, and was once used on a daily basis to shade him from the sun. If you see an umbraculum in a church, you’ll know it is in fact a basilica: if the umbrella is made of gold and red velvet it’s a major basilica, whilst less important ones have umbrellas made from red and yellow silk. The only time the umbraculum is opened is if the pope pays a visit.

Far from being just a simple device that keeps us dry or protects us from the sun, the umbrella has a long and fascinating history of symbolism and meaning in religious ceremony. From Ancient Greece and Rome right up to the present day, umbrellas and parasols have played an important part in ceremonies and processions within a huge variety of religions. Next time you open your umbrella to shield yourself from the rain take a moment to imagine just how important this simple device has been and continues to be throughout the world.

If you’d like to see your branding on the side of a sturdy umbrella, why not give us a call or drop us an email today to see how we can help.